Since the inception of AAEF, our coaches have recognized one athlete each year for the Thad Thorne Sportsmanship Award.  Throughout the recipient's years with the team, this athlete displays the sportsmanship ideals and qualities that all other athletes aspire to - not only cheering on their teammates, but cheering on those from other programs as well.  These athletes did not give up after a fall, but rather stood right up and got back on the lift to the starting gate. 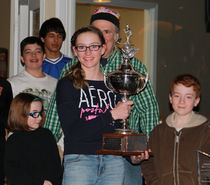 Since 1979, this award has been presented to one or more athletes by our coaches in honor of "his life long love of skiing, and his encouragement and support of young racers".  Irving's children, grand children, and great-grand children continue to be participants and supporters of AAEF. 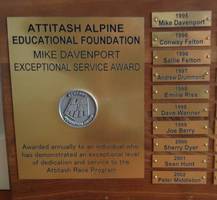 This award is named after Mike Davenport, who helped to shape the program during many of its formative years and donated so much of his time and effort.  Since 1995, the Board of Trustees has presented this award annually to members of our community who has made a difference for our athletes both on and off the slopes.  Award winners over the years have demonstrated selflessness, willingness, leadership, dedication, and plain old hard work.  As the name implies, it is recognition of exceptional service to the program and is bestowed on an individual or family who have gone above and beyond the call of duty during their association with the program.